“Oh yes sir, I was a famous ringer in my youth, at St Mary Overy’s. They are beautiful bells, but of all the bells give me those of Fulham, they are soft and sweet. St Margaret’s are fine bells, so are St Martin’s, but, after all, Fulham for my money.” 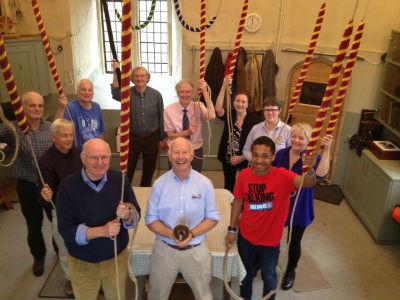 Our bellringers ring every Sunday at our morning services. The regular pattern of ringing is:

Visitors – ringers, would-be ringers and the merely curious – are always welcome, but please check with the Tower Captain in advance, especially for Tuesday practices.

If you are interested in learning to ring, or are ringers wishing to arrange a quarter, peal or outing,

The first mention of the bells is the Royal Commission Inventory of 1549 which records, the existence of "V grete belles and a lyttell belle in the steple". These were recast in 1652 by Bryan Eldridge of Chertsey. Records of 1728 show that an inspection indicated that the Tenor was broken, the Third cracked and the remaining bells in need of retuning. As a result, the Parish decided to commission a new ring of eight bells to coincide with local enthusiasm for the proposed opening of the first permanent Fulham Bridge over the Thames. The churchwardens instructed Abraham Rudhal1 of Gloucester to recast the six old bells and add two new trebles which were donated by William Skelton. The bells were transported down the Thames and whilst they were being unloaded the barge capsized and sank. The bells were recovered undamaged and hung in a new oak frame and at the opening ringing there was widespread appreciation of their excellent tone.

In 1746 the ring was further augmented to ten bells by the surprise donation of two bells by Theodore Ecclestone of Mortlake. These bells had originally been cast by Robert Catlin for Mortlake but they did not fit in the Tower. However the Mortlake trebles proved to be a poor tonal match to the new Rudhall bells and so in 1760 they were exchanged for two trebles from St Martin-in-the-Fields, Trafalgar Square, one of which was cast by Abraham Rudhall in 1727 and the other by Abel Rudhall in 1759. The most recent major work on the bells was undertaken in 1950 by Gillett & Johnston of Croydon when they were rehung on new ball bearings and the old frame was strengthened.

Throughout their history, the bells of All Saints Fulham have rung out to mark Royal occasions and events of national importance. During the sixteenth and seventeenth centuries the bells were also rung for the passing of the Sovereign between St James’ and Hampton Court, and the Bishop of London to and from Fulham Palace.

A more detailed history can be found on our History section of the website.