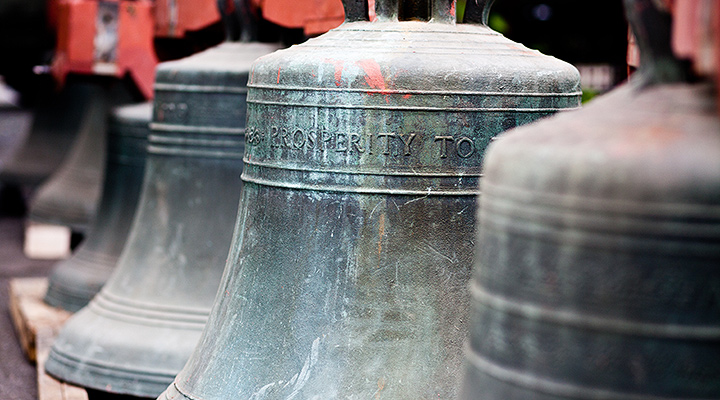 People have worshipped here for over 900 years.  The local people built a church around 1400, without machinery. Building the tower took at least 10 years, probably because they kept running out of money.  In 1454 it was finished.  So the tower we have today, all 96 feet of it, is almost 600 years old.

The floor of the tower bears the mark of the Bishop.  It is three steps lower than the rest of the church, which the Victorians rebuilt in 1881.  Here was the first school in Fulham. Above is the ringing chamber and above that is the bell-frame.

The church inventory of 1549 records six bells – V greate belles and a lytell bell in the steple. During the 18th century the original six medieval bells were recast, two new bells were bought and later two more donated, making first eight then ten bells. The bells were hung in the belfry on a medieval oak frame now warped with age.  The force of the heavy bells ringing made the tower swing in two directions at once, which pushed the corners of the tower apart, so the four tower walls were all splitting down the middle. 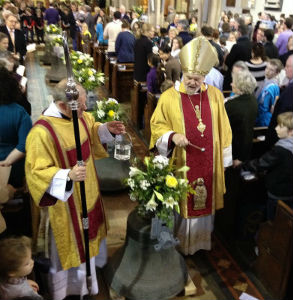 The tower was extensively repaired in 2013, when the bells were lowered for the first time in 63 years.  They were restored by Whitechapel Bell Foundry whilst the mortar and many stones of the tower were replaced.  Inside, a concrete and steel beam constructed around the inside of the tower pulled the corners back together.  From this hangs a new ringing frame, which holds our refurbished bells and one extra bell, a dedicated toll bell.

The refurbished tower and bells were blessed on Candlemas 2014 by The Bishop of London.   Now we are enjoying the sound and experience of our newly hung, restored bells and ready to train a new generation of bellringers.

Click here for information on getting involved in Bellringing at All Saints.

Click here for a more detailed History of the Bells.