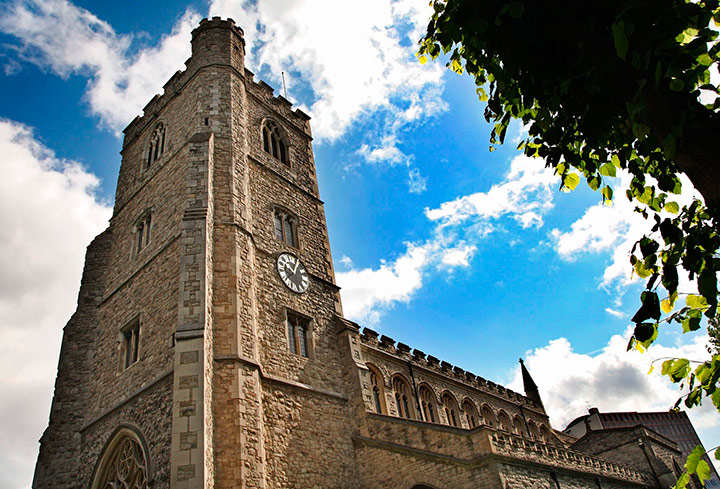 All Saints, Fulham’s ancient parish church, lies within the manor of Fulham. The bishops of London were lords of the manor and their former home was Fulham Palace whose grounds are adjacent to the churchyard. The original parish boundaries encompassed both Fulham and Hammersmith which was only made a separate parish in 1834.

The first written references to a church and parish priest date from the 13th century, and the dedication of the church to All Saints is first documented in 1445 at the time when the present Kentish ragstone tower was being built. It is now the only surviving part of the 15th century building.

By the end of the 19th century the medieval church, though much altered and with galleries on three sides, was both not big enough and liable to regular flooding from the Thames. In 1880 it was decided to demolish it and a new church was designed by the architect Sir Arthur Blomfield. This, the present church, is in the gothic perpendicular style and also built of Kentish ragstone with Bath stone dressings. It was built 3 feet higher than the mediaeval church to avoid being flooded.

The interior of the church consists of a nave, with large clerestory windows above, north and south aisles and chancel. Steps at the west end take one down into the tower. The bells are accessed by an exterior staircase. In 1999 glass doors were installed at the west door but the main entrance is by the porch on the north side. At the east end of the south aisle is the Lady Chapel which was glassed-in in 2009. The organ is at the east end of the north aisle and beyond it are the clergy and choir vestries. Most of the stained glass dates from the rebuilding of the church but the monuments were saved from the old church and reinstalled in the present building.

The parish records, dating from 1674, are deposited with the London Metropolitan Archives.

If you have an enquiry relating to historical matters to please contact Vernon Burgess. 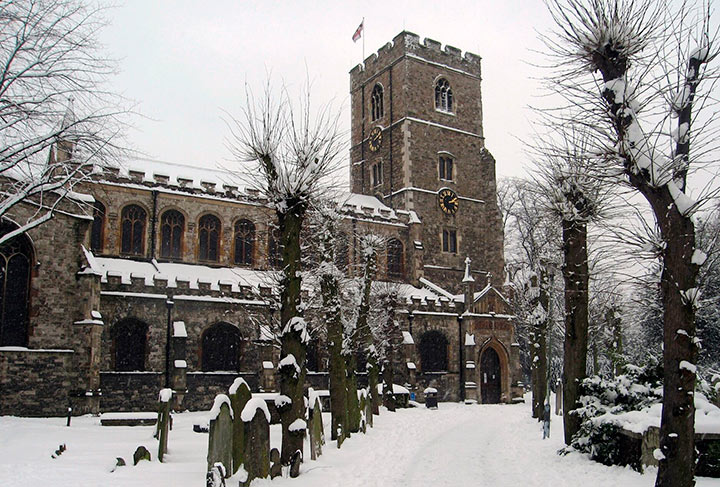